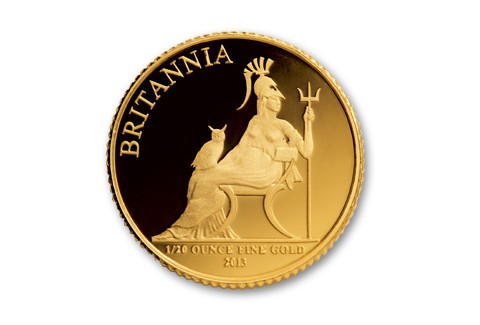 It’s been almost 50 years since the Beatles arrived in America, but the last few years have seen a new "British Invasion" of sorts. The Royals are everywhere, and millions are captivated by their every move.

Prince William and Kate married in 2011, followed soon after by the spectacular London 2012 Olympic Games. This spring marked the Queen’s 60th Coronation Jubilee. And just this past summer, the third heir to the British throne, Prince George of Cambridge was born.

In the midst of all the excitement surrounding the Royal Family, Queen Elizabeth II gave her approval to release an unbelievable 2013 Gold Britannia Proof coin – one that contains FIVE historic "firsts"!

Gold Britannia coins are one of Britain’s most popular gold coins. Traditionally, they have been struck in 22 karat or 91.7% pure gold. But starting with the 2013 issue, the Queen approved an even HIGHER purity – 24 karat or 99.99% pure gold! That makes these proofs the purest Gold Britannia's ever issued and among the purest gold coins issued anywhere in the world!

Even though it’s been producing coins for more than 1,000 years, Britain’s Royal Mint has never before struck a twentieth-ounce Gold Britannia. The 2013 Gold Britannia Proof is the FIRST EVER! Each contains 1.58 grams of 99.99% pure gold and measures 12 mm in diameter.

As official British legal tender, all Britannia coins bear denominations in British Pounds (£). The 2013 Gold Britannia Proof is the FIRST EVER Gold Britannia to bear the £1 (One Pound) denomination. The first year of a new denomination is often one of the key dates in the entire series, and can be highlysought after in later years.

As one of The Royal Mint’s largest official distributors, we secured our allocation of these historic 2013 Gold Britannia Proofs as quickly as possible. The coins were then submitted to Numismatic Guaranty Corporation (NGC), one of the top third-party coin grading services in the world.

Each coin was rigorously inspected by a team of two highly-trained grading experts, using the established 70-point coin grading scale. Only those select coins which were judged to be of nearly perfect Proof 69 (PF69) grade were reserved for this exclusive offer.

The Royal Mint reports over one million coin collectors within the U.K. – and many of them are avid Britannia collectors – but we have secured your place at the very head of the line for this spectacular, "World’s First" certified Twentieth-Ounce Gold Britannia Proof!

When you consider that this 2013 Gold Britannia Proof is certified to be in near-perfect Proof 69 grade – and that there are actually five "firsts" in this historic gold coin – it’s not surprising that many of our clients tell us that they’re salting away a number of coins.

After all, you rarely get a second chance at a multiple World’s First. Lock in yours before the extremely limited edition is gone!